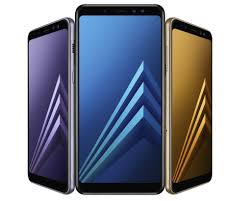 Samsung officially launched two new members of their A-Series Smartphone on Tuesday: Galaxy A8(2018) & Galaxy A8+(2018). Both the phones are connecting link between flagship & midrange devices. Samsung launched these only in South Korea which is their home market.
The main highlight of these phones is Dual Selfie Camera which is the first time on any Samsung Smartphone. It also comes with Infinity Display & IP68 water & dust resistance similar to Galaxy S7 & S8+.

Full Specifications & Features of Galaxy A8 and A8+:

Â  Display – Samsung Galaxy A8 comes with 5.6″ FullHD+ Super AMOLED 2220Ă—1080p 18.5:9 display. While A8+ having larger 6″ display.
Â  Processor – Both the Galaxy A8 and A8+ are powered by Samsung’s Exynos 7885 Octa Core Processor (2Ă—2.2GHz + 6Ă—1.6GHz) which is the new competitor for Snapdragon 660 Chipset.
Â  RAM&ROM – A8 has 4GB RAM and 32/64GB ROM whereas A8 has 4/6GB RAM and 32/64GB ROM expandable up to 256GB via MicroSD Card.
Â  Android – Both phones run on Android Nougat 7.1.1 based on Samsung Experience UI.
Â  Front Camera – This is the very new feature of Samsung phones. Both phones have dual camera with a 16MB primary lens & 8MP secondary lens with the aperture f/1.9. Selfie images will come out with Live Focus that means nice Background Blur selfies.
Â  Rear Camera – On the back, there is one 16MP Sensor with f/1.7 aperture. Low light photography will be enhanced. It does not have any OIS or EIS but Samsung says it has ‘Video Digital Image Stabilization'(VDis).
Â  Battery – A8 has 3000 mAh battery while A8+ has larger 3500mAh battery with Samsung’s Adaptive Fast Charging.
Â  Other Features – 4G LTE, Wi-Fi 802.11ac, Bluetooth v5.0, GPS/ A-GPS, NFC, and USB Type-C port, Samsung Pay. The fingerprint scanner is now in a right place just below the rear camera. It does worry like S8 & S8+ to reach it. Both phones also have Bixby Vision on camera app but no dedicated Bixby button. Face Unlock feature is added on both but it is not as fast as OnePlus 5T. These two phones are the first ones in the Galaxy A-series to be compatible withÂ Samsung’s Gear VR headset.
The smartphones have been launched in four colors: black, orchid grey, gold, and blue.
The new updates to the Samsung’s flagship series make them tough competitors to the phones like the Nokia 8 and the OnePlus 5T, which is around 32k to 40k segment.
The company is expected to bring them to other worldwide markets, including India. It is expected that Samsung will start selling both the models in early January 2018. Galaxy A8 may cost $599 whereas the Galaxy A8+ may having a price tag of $649. In India, the prices of these two phones could be between Rs 35,000 and Rs 40,000.

Related   How to Leverage Live Streaming to Grow Your Business

Leaks : Lets talk what we know about the Samsung Galaxy...