Are you planning on buying a new phone and just happen to have a conflict between Samsung Galaxy S9 and iPhone X,Â  then this article will definitely be useful for you. 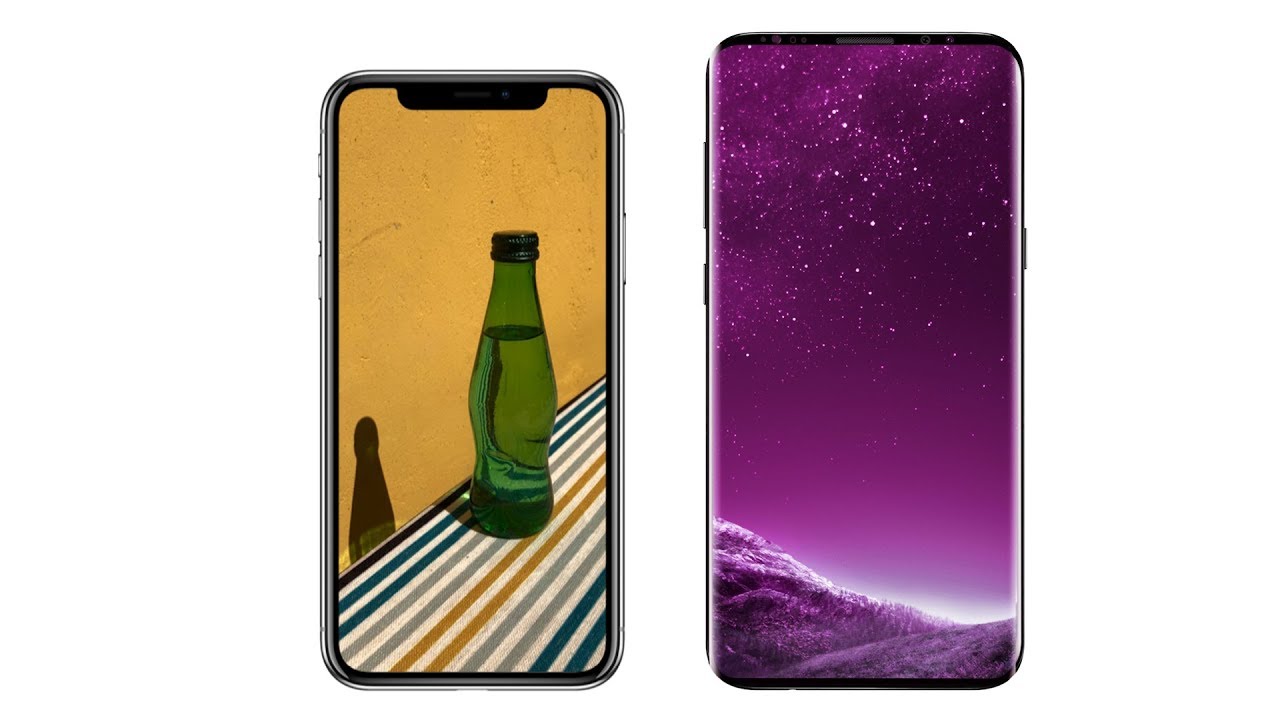 In this article, we shall put some light on both the devices and their features so you can make a wise decision.

Till date, Apple has been the undisputed smartphone king, but now Samsung is all set to take the throne away. Of course, iPhone is not going to let go off the throne so easily, so let’s take a peek at what both have to offer.

Galaxy S9 and S9 Plus pre-orders began on March 2nd while the iPhone is expected to reach the shelves by March 16th. Though the reviews will be posted by then, still for those who just can’t wait to know who offers what, like price, size, battery etc then you should read ahead.

The price might be the first thing you’ll look at before purchasing. Here, Samsung definitely bags the throne. The cheapest 64GB iPhone X you can get still costs around $999 (AU$1,579). With the S9 you not only spend less but get two prices to choose from as the price varies from $720 (AU$1,199) for S9 to $840 (AU$1,349). Again, be throwing Apple comes with 64GB expandable memory thanks to its external MICRO SD card slot. 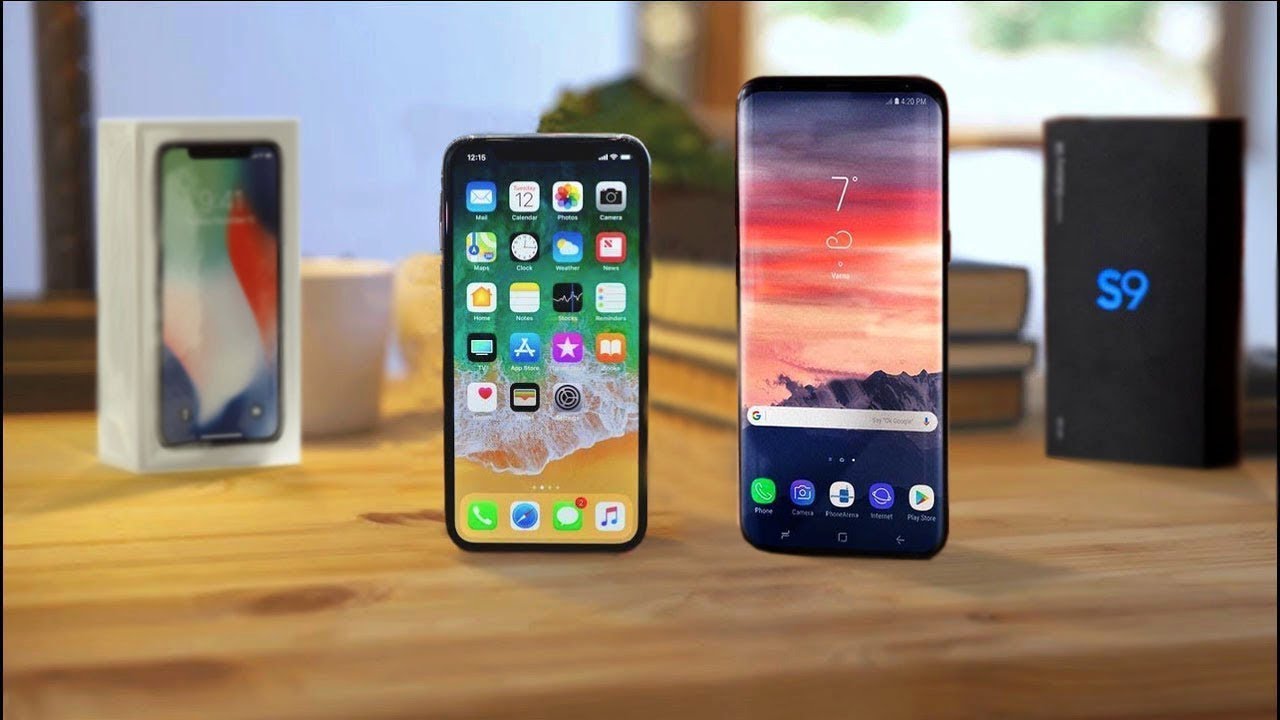 NOTE: Apple iPhone 8 Plus almost has all the X features and the price is also quite competitive, but some old-fashioned bezels will come along as well.

Samsung bangs again on this front as well. Yes, it comes with a headphone Jack while the iPhone lacks this option. You will require using a dongle for your iPhone X as traditional headphones while Apple uses the lightening ports or you can also use Bluetooth feature.

One runs on Android Oreo 8.0 and the other on IOS 11. Â Now if we are to compare apple and oranges, obviously the preferred fruit wins, but when it comes to choosing this for your device, the scenario is totally different, still let’s make this easy. 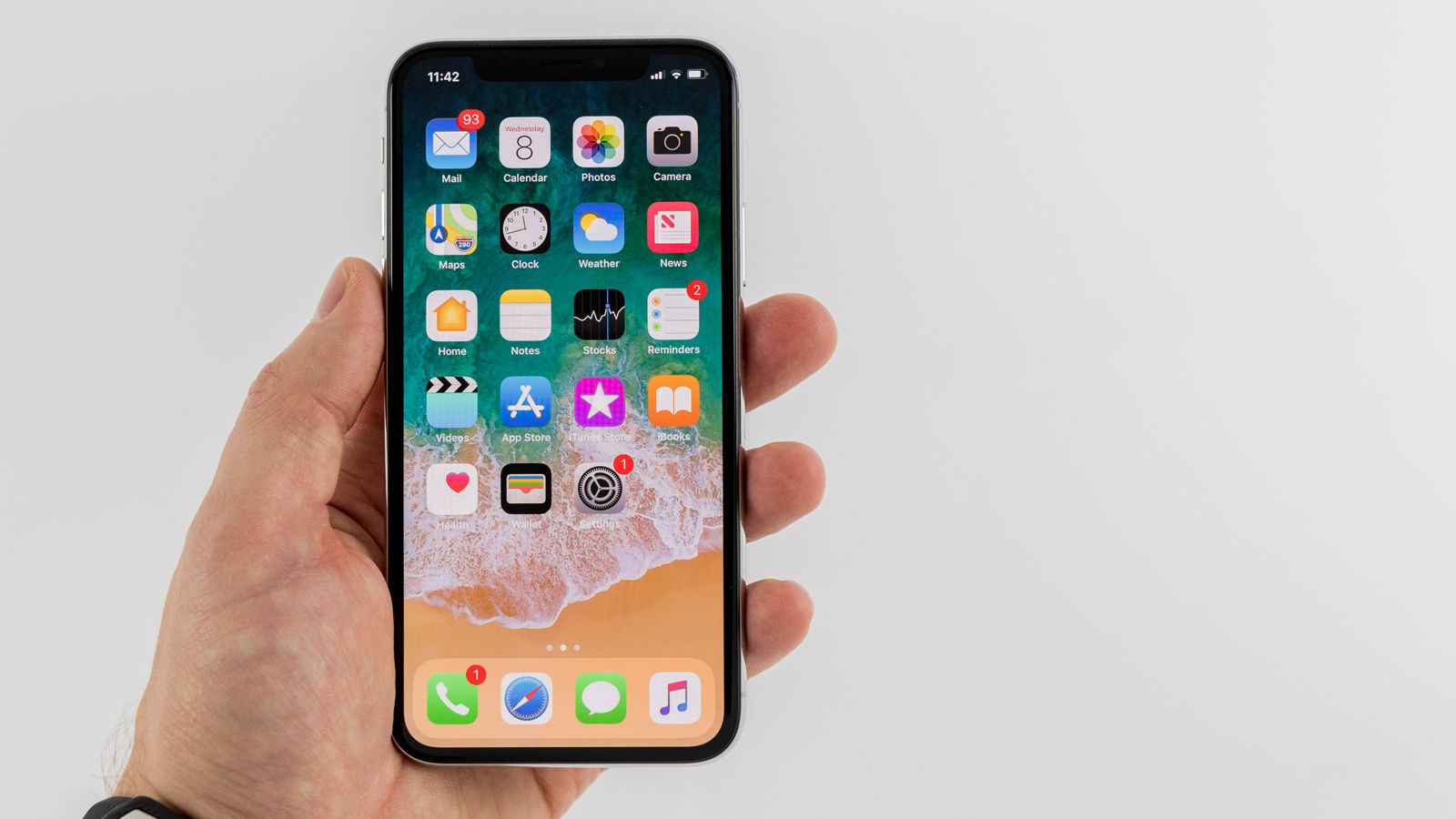 Even if you intend to be neutral on the performance, you need to keep in mind, the OS has a big impact on the life if your device. If you’re an Apple owner and have purchased all your favourite shows on iTunes, then you’ll have issues on accessing them on the Galaxy device. Got a HomePod, still, no use as Google is more friendly with Apple, well almost, like video’s and audios are transferable, but some iPhone apps cannot be sent to your chrome cast device.

Benefit: Varies on the user

Both come with glass-on-glass metal frame and barely visible bezels. The Galaxy S9 has curved edges with a screen having a spill over the edge feel while the iPhone X bezels are slim top to bottom with an intrusive top notch feel. Apple’s iPhone is available in three variables monochromatic, silver and Space Gray. The S9 is available in Coral Blue, Midnight Black, Titanium Gray and Lilac Purple. 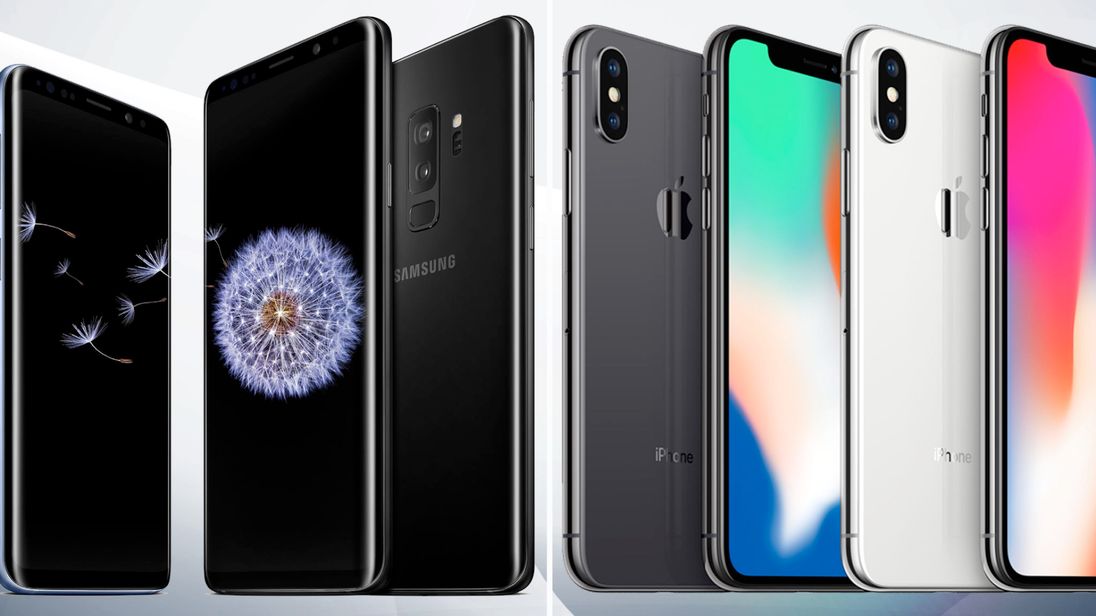 The iPhone supports the same 5.8″ screen minus the notch as the S9 while the S9 Plus comes with a larger display of 6.2″ screen. All three support OLED display with exception to S9 supporting a higher resolution with pixel density of 2,960×1,440 pixels/529ppi and 570 PPI compared to the Super HD Retina Display available on the iPhone X that gives 2,436X12,200 pixels/458 PPI. Yes, the iPhone comes with the TrueTone technology that adjusts the color according to the ambient light giving you a more natural looking image. 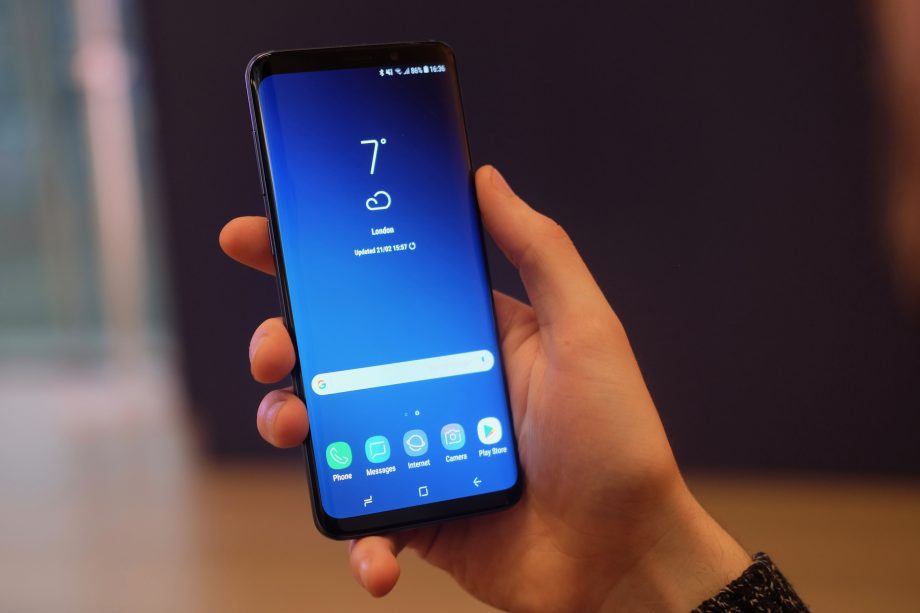 The iPhone is packed with stereo speakers on the earpiece and on the bottom as well. S9 and S9 Plus are the first in the Galaxy series to get stereo speakers. They are designed by AKG and support Dolby Atmos codec which gives a more clear and loud sound than even the S8. The audio profile can also be set right from the settings in the S9.

Both phones do not have the on-screen fingerprint feature that Vivo X2o Plus HD has, nevertheless, the S9 has the fingerprint scanner on it’s back following the steps of its predecessor for paying via mobile or to unlock your device. With the exception, this time it’s better placed. On the iPhone X, you require using Face ID or password to do payments. The iPhone 8 Plus still has the good Touch ID fingerprint front sensor, but a thick top and bottom bezels will also be part of the looks.

Benefit: If fingerprint sensor is must, Samsung it is.

Both devices support face unlock features, just the technology is different. As said above, the iPhone uses True Depth front camera that scans your face using 3D infrared dots.Â  In fact, Apple states the Face ID is much safer than their Touch ID feature. 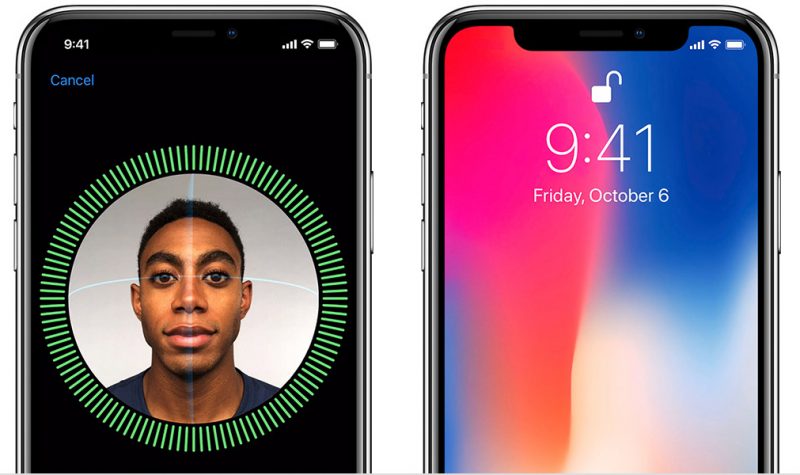 Galaxy S9 and S9 Plus use the intelligent scanner. It’s a combo if iris scanner and a less secure facial recognition feature used via the front camera to unlock the device. Unfortunately, this feature is easy to unlock as the iris scanner is only on backup if light conditions don’t allow a proper facial identification.

Though much can’t be said about the camera,Â  as the real world has not tested it, still here are the specifications. 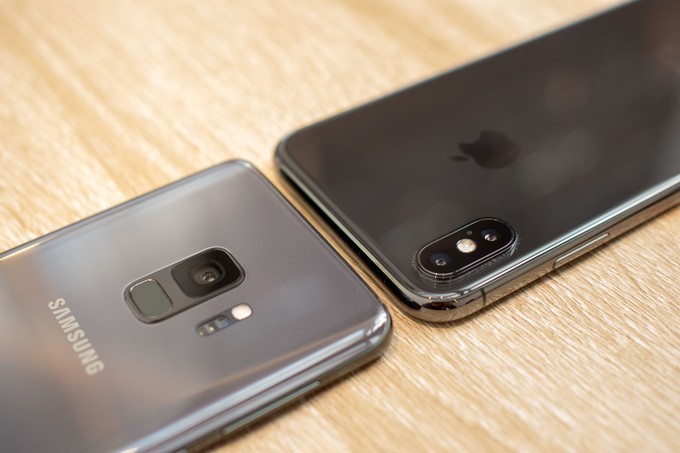 The S9 comes with a single shooter and So Plus comes with a dual lens setup much similar to the iPhone XÂ  that supports a 12ZMP wide-angle of 12MP telephoto lens providing better zooming so you can take DSLR-type portraits. Just like the Note 8, So Plus has the ability to control this blur effect even after the image is taken. The iPhone X, on the other hand, comes with Portrait Lighting allowing adjustments during and after the image is taken. The below chart gives a better glimpse of what to expect:

From the reports received, the Galaxy S9 has been declared the best smartphone camera device is making it rule over not just the iPhone X, but Google Pixel 2 as well.

The S9 offers three tiers of storage depending on which is available near you. The three available tiers are 64GB, 120GB and 256GB with 400GB expanding storage. The iPhone X, on the other hand, offers only two tiers of 64GB and 256GB storage without an SD card slot. 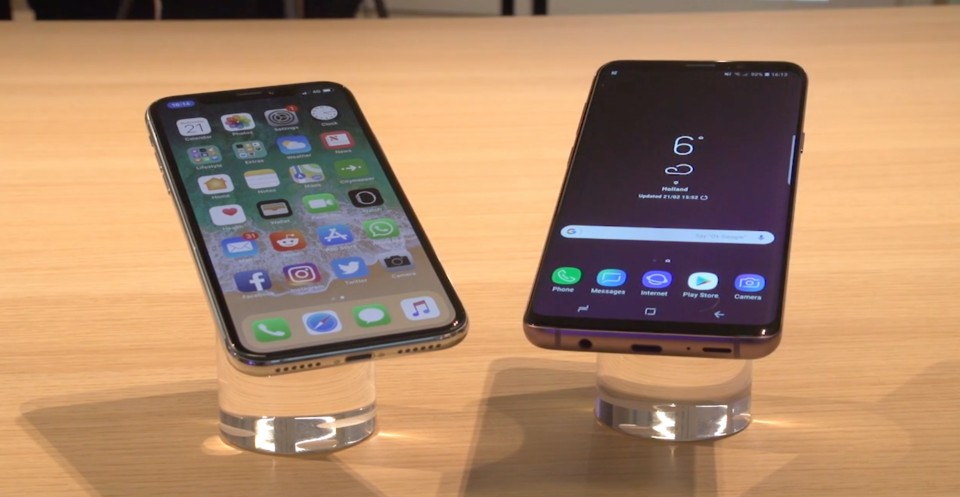 The S9 is powered by Qualcomm Snapdragon 845 or by Samsung Exynos 9810, as per your region. The iPhone is powered by Apple’s A11 Bionic chip. No doubt, both the machines are humongous, but until used, clarification is not possible. Still for those who intend to use Google docs or switch between tabs Samsung is a better option.

Samsung to build its very own 1,000 fps camera