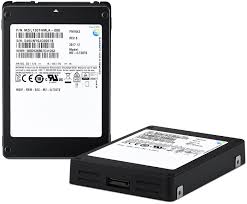 In the silicon age, we are growing fast and tech-moguls are growing faster. They trying to win every battle which they face. Now Samsung beat everyone by creating world’s largest capacity SSD (solid state drive) which contains a humongous 30.72 terabytes of space.

This device is called PM1643. According to Samsung, it is the largest capacity serial attached SCSI solid state drive. It is truly a next-generation device.

There’s enough room on this device to store around 5700 full Hd movies at 5gb each. This is the successor of last year’s 15.36 TB state drive.

But the amazing thing doesn’t just end here. It comes with much better performance than ever before. It has writing speed of 2+ MB per second. It contains 12g b per second Sas interface and features read and write speeds of 400,000 iops and 50,000 iops.

Samsung is winning hearts of tech geeks after launching this product and it created a storm in the electronic world. Every lip is now talking about this product in the tech field.

Just like previous SSDs, this drive comes with a new controller that integrates nine main and rest sub-controllers.

The company still didn’t clarify on when this product will be available to the public. They still in doubt of the price. But most techies feel that this product, as glamorous as it is, will be very expensive. But it will be worth it because it is ahead of its time. The last product with around 15 terabytes was worth 10,000 dollars. The company will launch 6 versions later this year. These will be 16.36 T.B., 7.68T.B., 3.84T.B., 1.92 T.B., 960 G.B., and 800 G. B. And of course, if they contain less memory, they will be a lot cheaper then this device. But people who don’t need much bigger device can buy those small space device which is also very fast and best in their own way. They will come really handy as Samsung is trying to be better than any other companies out there.

A company named Seagate back in 2016 told that they are building a 60 t.b. SSD device which will be available for us on 2017 but still after all this time this advanced technology isn’t available in the market to buy. Surely company might have made that device but it won’t mean anything until it’s launched to the public.