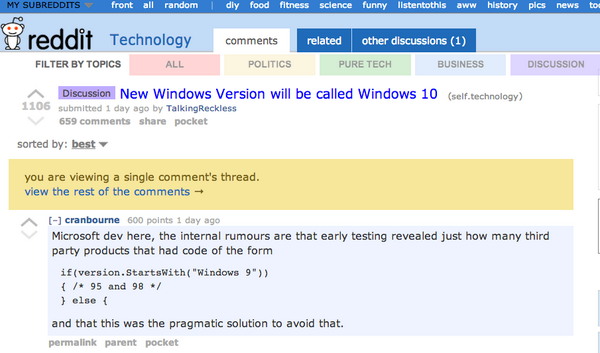 Two days back Microsoft launched the next version of Windows OS and it shocked the tech world by revealing Windows 10 skipping the number 9. Will surfing the web today I found the possible reason for doing so. That was the Legacy Codes issue. According to latest reports, Microsoft decided to go with Windows 10 branding to avoid issues related to Windows 95/Windows 98 legacy code. Here’s a tweet from Engadget who were the first to spot this issue on Reddit.

If Microsoft named it as Windows 9, all classic apps with the above code structure will treat it as either Windows 95 or Windows 98. So, Microsoft decided to avoid it by naming it Windows 10.
Do our readers think this was the actual reason for naming the next Windows as number 10 or there is something else cooking in Microsoft?