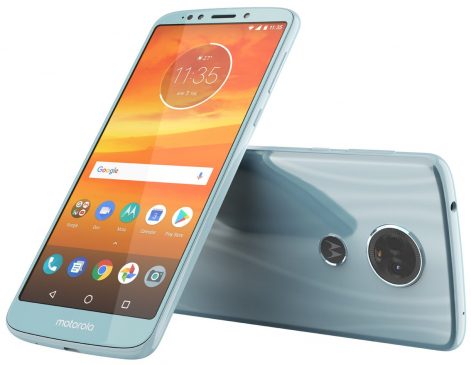 Amidst the profound leaks and speculations surrounding the Moto G6 series lately, weâ€™ve now something to hear about the Moto E5 lineup. Yes, the official press render of the Moto E5 Plus surfaced on the internet a couple of days ago – notably, prior to its actual launch.

The render has fairly thrown light on the looks and design of the Moto E5 Plus. From it, we could infer that the device has got a neat and glossy finishing, in a Light Blue hue. Also, itâ€™s embedded within moderately thin bezels, with rounded corners.

Diving deep into what is shown in the renders, we could make out a few more things about the model. Accordingly, the E5 Plus features an 18:9 aspect ratio, unlike its predecessor E5, which entailed a normal 16:9 aspect ratio.

Coming to the cameras, we can find something, which actually looks like a horizontally arranged dual camera setup on the rear. However, it was later confirmed that it houses only a single lens. Meanwhile, the cutout beside it is perceivably a laser AF or microphone.

The same goes for the case of the front-facing camera. It looks like a dual-lensed camera, yet it could also be a single shooter paired with a LED flash. The fingerprint sensor is placed underneath the Moto logo on the phoneâ€™s rear side.

Furthermore, there is a 3.5mm audio jack on the top and a USB port at the bottom. Itâ€™s probably a Type-C port unless Lenovo decides to provide on the E series. The volume rockers and power buttons are placed on the right side.

Although we couldnâ€™t find a speaker grille on the bottom. Hence, itâ€™ll probably be paired with the earpiece. Weâ€™ll have to wait until there is an official announcement, to know the other specs and features.