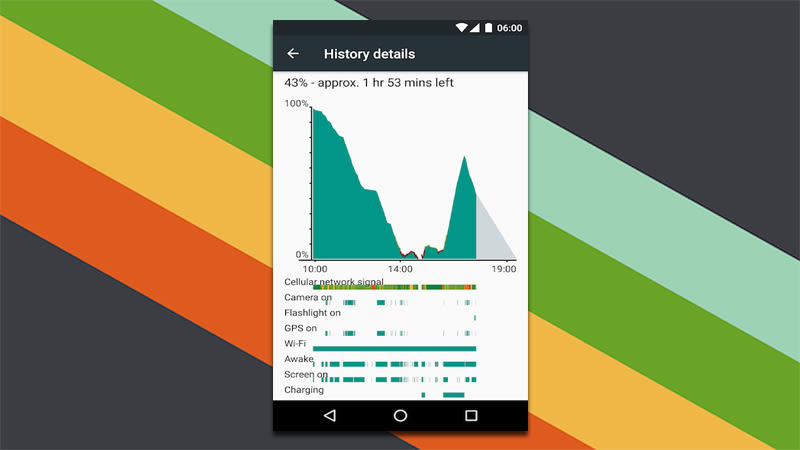 Android holds 81% percent of market share. Almost everyone uses smartphones with Android OS. IOS, Windows come next in the ranking. The major problems most of the android users face is a battery drain. There have been many apps termed themselves as a task killer, optimizers etc. Android operating system is designed in such a way that it automatically kills background apps once the count reaches a certain limit.

The so-called optimizer apps are doing nothing but increasing burden on the android system. The apps which we are going to discuss now show the stats of battery usage. It helps the users to better understand which apps use battery more even in idle states.

This app gives us a brief info on how much juice left in the smartphone. “Time left” option depends on lot of factors. For example, it shows 15 hrs left at an instant but the time left drastically decreases with usage. It shows reading on how much battery goes while screen on and off.

CPU frequency usage can be monitored with System Monitor app. This is useful to find out the background apps draining the battery. When you are not using mobile, that state is termed as idle. System Monitor shows deep sleep state which indicates that no apps are working background. Well, if it shows a reading like 1.4 GHz, 1.6 GHz etc then some apps are using CPU even in idle state.

System Monitor shows statistics of how much CPU and RAM is used by various apps installed on your mobile. This way you can find out the apps draining the battery and can uninstall them.

Rooting an android phone is not suggested. Warranty goes away with rooting. Mobile might get unstable but there are uses for rooting too. You can use Android to its full capacity. There will be no limitations once the phone gets rooted. Some of the apps to dig deeper into battery stats after rooting are GSam Battery Monitor and Better Battery stats.